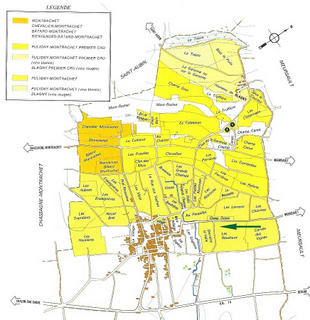 Lets talk about white wine.
Everyone and their grandmother is talking about red wine and somehow white wine gets left behind or is treated as the "less serious wine" - rubbish.

Lets look at Burgundy - the home of the most famous "Chardonnays" in the world. Probably the most famous and most expensive in the world is - Montrachet from the Burgundy region in France. What is Montrachet? - merely a plot of land. However, in the wine world that particular plot might as well be the center of the white wine universe. Consequently the hierarchy and pricing of a white Burgundy is a function of its proximity to the "center". Grossly simplified admitedly - but basically true.

Something has to be said of the quantities of some of these grand crus. Some of the most famous estates will perhaps produce 1-2 barrels of Montrachet or Chevalier Montrachet in a given year. This is roughly 25-50 cases per producer. Or basically 300-600 bottles of this mythical white wine in existence. Compare that with the annual Bordeaux First growth producer of approx 100,000 to 200,000 bottles per annum and you begin to understand how little of it exists in the world.

The center of the universe is Montrachet which bisects both Chassagne-Monrachet and Puligny-Monrachet (kind of). Following that the Grand cru are :

In Puligny-Monrachet. We have the premier Cru starting with Le Pucelles which is a stones throw away from BBM and BM itself. Often the slowest maturing 1er Cru and usually carries a premium over the others (first among premier Crus). The others are Le Cailleret, Clavaillon, Le Combettes, Le Referts in order of increasing distance to Montrachet.

Now lets not forget the other side : Chassagne-Monrachet.

This tends to be the "forgotten" zone and hopefully it stays that way. Perhaps it doesn't have the refinement of a Le Pucelle but it can give it a run for the money. Of particular note are the Premier Cru vineyards of : Blanchot, Les Vergers, Clos-Saint Jean, La Maltroie, La Grande Montagne.

My favorite Domains from this side of the fence are Domaine Leflaive (http://www.leflaive.fr/) , JM Boillot, Henri Boillot, Domaine Leroy/D’Auvenay and of course Domaine de la Romanee Conti which only makes one white – Montrachet (ouch!). On the Chassagne side Ramonet, Marc Colin and Fontaine Gagnard (dramatic upswing in quality recently).

The 2002 vintage is one where I have been rarely disappointed. From village cru to Premier Cru and Grand cru. This is one uniformly excellent vintage and has got to be better than 1996. 2003 on the other is much less uniform. Prices are high and perhaps even higher than 2002 but nowhere as profound. Stick to the village wine and perhaps occasionally a premier cru - value would be found there.