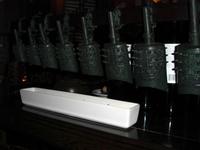 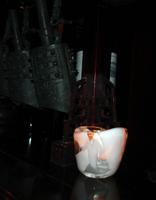 First time here and it is quite cozy. The food is quite good - standouts were the apetizers being escargots, baked crab shells and lobster bisque. At $380/pp its not too bad.

Anyway on to the wine.

p.s. Okay okay so this bottle is not the Macon-Uchizy but its basically the same label and bottle save for the wording.

1994 Penfold - Bin 707
Upon opening, still has primary fruit flavor and odors but not like when it was young, starting to develop some 2ndary traits but not much. Don't give this too much air time - it started to become less balanced as the night went on becoming increasingly acidic & sour. I don't want to generalize but I have just had many similiar experiences with Australian Cabernet with a little bottle age. Not sure if it is the vinification process, my choice of wines, this bottle, the region or what. This one just doesn't hold it together like a good Bordeaux, and I have had similiar experiences with other Cabernet based wines as well . At what ~ $100/bottle for this vintage - I just cannot recommend it to people - there are better values to be had. Could imagine this to have been 93-94pts. on release now?... ~87pts.

Anonymous said...
This comment has been removed by a blog administrator.
8:41 PM