2001 - Walter Hansel - Russian River - Chardonnay Cahill Lane.
On opening - not much of anything on the nose except a slight hint of toast/paine grille. After an hour a bit more hints of toast and a little bit more citrus notes - just barely. At 2 hours the wine start to fill itself out but was still closed. At 3 hours, the wine start to expand and fill out - again not by much. The dinner was almost over and people were having dessert wine. At this point it was recorked, put in the fridge until tommorrow.... 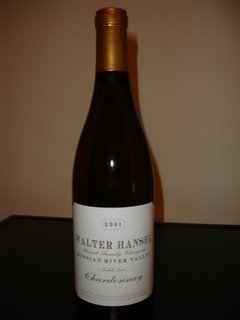 ....18 hours later. The nose was much more impressive, distinct aromas of toast, almonds, lemon and white flowers - more of the same on the palate. The finish did come off a little hot but might sort itself out in a few years. At this point, this was looking alot like something from Burgundy. In fact, Chassagne-Monrachet but minus the distinctive mineral/flint aromas not sure if it was covered up by other more dominant features. Heck, if someone said this was a Batard-Monrachet I would have believed it.

I would just like to point out that a white wine lasting 18 hours and still going strong (without gas injections or vacuum pumps ) is just amazing. Many red wines wouldn't make it lets not mention whites. My guess is this wine was probably peaking somewhere around 10-12 hours.

Grand Cru level without the Grand cru price. Believe this needs another 5-10 years. It should get really interesting at that point. Great value for money. Originally priced at ~USD$35 on release ( A quick glance at winesearcher shows it at $69 currently ). Total production ~700 cases. This is the real deal ladies and gentlemen - impressive potential! 94+ pts