Domaine Jean Francois Coche Dury is a very small vigneron located in Mersault. While production levels are extremely limited, his reputation is anything but that.

The property holdings are about 26 acres. The yields are low with generally high vine age and plot density. The methods are about as traditional and "old-fashioned" as one can get. Careful selection of "Organic" fertilizers (i.e. manure) and avoidance of chemicals are practiced. First and foremost Coche-Dury pays attention in the vineyards whether its plowing, fertilizers, pruning, de-budding etc... The current portfolio includes Corton Charlemagne, Mersault Perrieres, Caillerets, Narvaux, Rougeots, Vireuilts, Chevalieres. There are some reds in Auxey-Duresse, Monthelie and even a 1er Cru Volnay ( ??!!) - the majority is Mersault however.

The Coche-Dury Portfolio (not necessarily comprehensive):

Corton Charlemagne - Grand Cru
Coche-Dury's plot sits in the center of Corton Charlemagne. The soild consists of limestone and clay. The production levels for this legendary bottling is under 2000 bottles annuallly; this stuff is supposed to be amazing. However this yours truly has not personally tasted it - partly due to the extraordinary prices paid for this one (>USD$1k per bottle). Having had some spectacular Corton Charlemagne from Leroy at 1/3 the price (not cheap already) - its hard to imagine this offers 3x as much stuffing - however, people are eager and willing to pay the price.

Mersault Perrieres - 1er Cru
Again miniscule production levels ( 3000 bottles annually). If there was a plot which deserves Grand Cru status in Mersault (there are none), it would be Perrieres and certainly Coche-Dury's bottlings. From 45 year old vines. 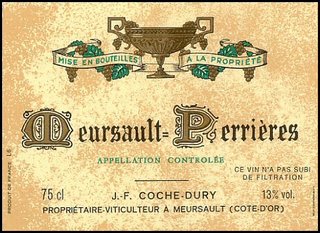 Mersault "Genvrieres" - 1er Cru
Started with the 2003 vintage. Thats about all the info on it - have not had it. Readers are welcome to send in their donations!! 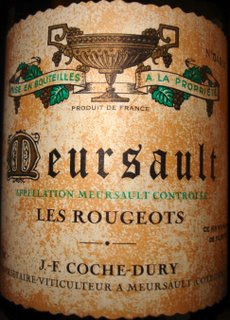 Puligny-Montrachet "Les Enseigneres"
Supposedly, this parcel is just below Batard-Montrachet. In some shops it defintely sells like a Batard Montrachet and perhaps even more!! 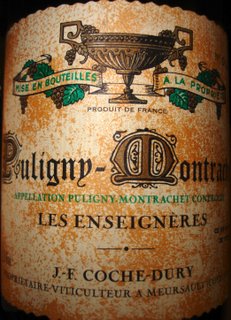 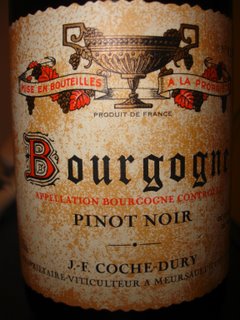