Marriages - What works
When was the last time a bunch of wine geeks got together with fabulous wine and the food just didn't quite go well. Sometimes we have fabulous food and it's just missing that wine to "complete" the evening. Food and wine pairing is an art - a marriage. When it works the sum is greater than the parts - that's a promise. Without some knowledge and experience both in wine and food - it's hard to pull this off. The other day we bumped into some very nice combinations with friends and thought it might be worth mentioning here. 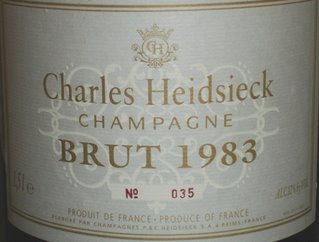 Every autumn between October and November, hairy crabs from Hangzhou are the rage among Chinese with it's sweet meat and abundant crab "miso". In it's purest form the crab is poached/boiled as is and accompanied by a special vinegar with ginger pulp in it. Well if that vinegar and ginger sauce goes well with the crab why not...... a mature vintage champagne?? It worked.. 1983 Charles Heidsick Brut in Magnum. Frankly, this marriage was dominated by the '83 Heidsick which was too good ( nutty, toast, smoothness, abundant mousse) while this year's crabs were a bit off. 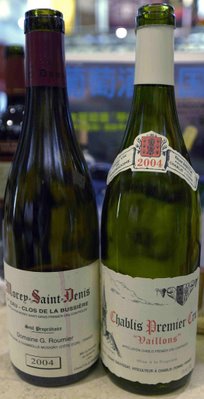 The '04 Dauvissat Vaillons has a beautiful nose that is hard to say no to. It was "very Chablis" with sharpness, acidity and a sea salt/mineral finish. We decided to have some oysters on the half shell straight up with it. Whoever told you that Chablis and oysters are a natural match didn't mention the fine print. It has to have a) Sufficient sharp acidity (ever wonder why people squeeze lemons and/or have zesty tangy sauces with it?) AND 2) That mineral sea/salt undertone. In this case, the Dauvissat has it in spades. IMHO, on it's own '04 Vaillons is infaticide ( another ~5-7 years) but with oysters it was heaven. Next time we'll need to try this with other oysters to see if it can get any better. 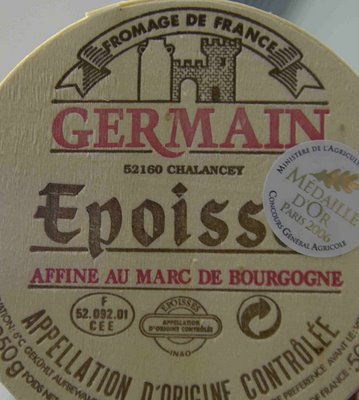 Epoisse Cheese from Burgundy. This is a hand washed cheese and is slightly soft with lovely earthy, spicy and PUNGENT aromas ( like dried Chinese salty fish - some of you will know what I mean). We heated it up a little ( ~20/30 secs in a Microwave..... ) and had it with some bread.

Urban myth #2 - Cheese and red wine is an automatic match. How many times have you attended a "wine and cheese" party and come away thinking if you had an impaired palate or just didn't get it? Wine and Cheese pairings are some of the trickiest to manage well. Bad wine/cheese pairings are like a marriage between 2 sumo wrestlers - ugly. A safer way would be to try cheese and wines from the same commune. It does make sense though, people living in those villages had to put up with it for centuries so it can't be that bad. Anyways, we aren't going to talk about ugly marriages here - this one works.

Don't just think any red Burgundy can go with it. It has to have depth, concentration and structure - otherwise the Epoisse will wipe it out. Go with a 1er or Grand Cru of some quality. The '04 Roumier 'Clos de la Bussieries' has that extra depth even though it wasn't an outstanding year. Again this can age for a few (~5-7 years) more years. With the cheese - why wait? It was quite lovely at this point.

Hello, I cannot find your email so I try it this way.
Wein-Plus is one of the biggest English and German wine related websites in the internet. We would like to exchange links with your websiteblog. Are you interessted?