The wine hunter is back!!!

Instead of hitting the booze immediately, let's go back in time for some history lessons.....3 Stories and 3 wines.

In 1395, Philip the Bold, the duke of Burgundy decreed that the gamay vine was to be uprooted within 30 days or be slapped with a fine. It was decided that gamay was not well suited to the best qualities of wine, instead the Pinot Noir grape was recommended. 100+years later, Louix XI annexed Burgundy and the prior of Saint-Vivant had to file tax returns and declare his properties. 'Le Cloux de Saint Vivant' included 4 'clos' or walled parts. This included Le Cloux des Cinq Journaux. Around 1662, this Clos together with an adjacent plot of three ouvrees was renamed "La Romanee". In early 1700's the going rate for a good vineyard was 200 livre per ouvree.... Using some accounting sleight of hand this amounts to roughly US$13k per acre. On the faithful day of July 18, 1760, "La Romanee" was purchased for the unheard of sum of 2,310 live per ouvree or roughly 10x the going price. The purchaser was one Louis-Francois de Bourbon - the fifth prince de Conti; a cousin of King Louis XV. Thus was born "Romanee-Conti", always expensive and never was cheap even way back 246years ago. 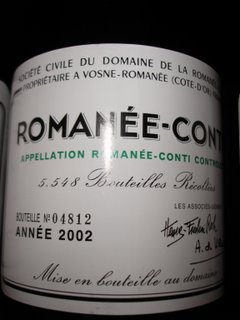 On July 14, 1789 the Bastille was stormed and the french revolution was in full force. The Prince fled the country and his lands were seized by the new government along with other plots owned by the church. In 1790's the confiscated land was sold to the highest bidder at auctions. One of them offered on the auction block was "La Romanee de Saint-Vivant" owned previously by the Benedictine order. This was bought by Nicolas-Joseph Mary from Nuit and son-in-law of Gaspard Monge. The next picture should start to make things clearer.... 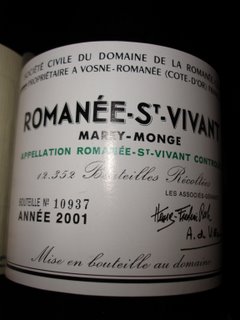 Now fast forward into the 20th century. It was the 1930's and the economic depression was entrenched even in Europe. On August 31, 1933 the Liger-Belair family was forced by hard times and internal disputes and decided to sell of a parcel of their vineyards.

This plot of slightly over 1 hectare was purchased by one Edmond Gaudin de Villaine. Together with the existing land owned from inheritance through Jacques-Marie Duvault-Blochet and additional 4hectares of the adjoining Le Gaudichots was officially ruled by the courts under one appelation, a monople - the name was and still is "La Tache". 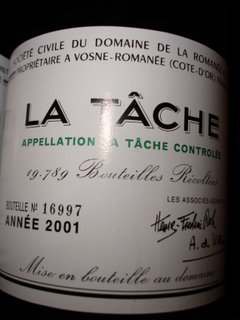 The times were difficult for the owners of Domaine de la Romanee-Conti. So much so that one of the partners Jacques Chambon wanted to sell his stake. Initially, Maison Joseph Drouhin was approached as they had been a close business partner. Maison Drouhin did not take up the offer and the opportunity fell on a wine merchant from Auxey-Duresses by the name of Henri Leroy....

The story continues but it's time for bed.....


*References taken from Gert Crum's excellent book on the Domaine.
Posted by Wine-Hunter at 10:13 PM