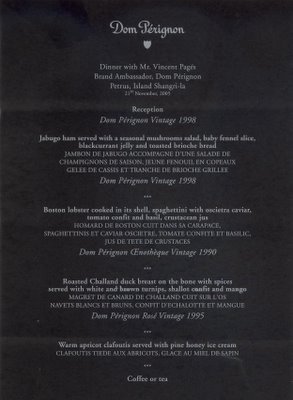 Monday night. We had a nice dinner at Petrus - the restaurant at the top of the Hong Kong Island Shangri-La hotel. The food was decent. The canapes were quite nice. The Jabugo ham was a bit of a disappointment. Anyone having had the real thing (i.e. 36month aged Jambon Iberico Pata Negra ) will feel the Jabugo came up a bit short as far as flavor depth goes. Next was the Lobster in the shell with spaghettini and oscietra caviar. Lobster was decent but I really enjoyed the spaghettini with caviar in tomato confit. The challand duck breast was quite good here - well executed. Good depth of flavor in the duck as well as a nice "fatty" layer right under the caramelized skin. hmm hmm.

Anyway on to the wines.

1998 Dom Perignon : Really forward wine, acidity perceivably lower than the '96. Nutty hazelnut/almond nose. Drink up fast - don't think this is one for the long haul. 92pts.

1990 Dom Perignon Enotheque : Much better. Nutty hazelnut, almond and toasty nose. Still very lively with numerous bubble trails. A champagne in adolescence starting to pick up maturity and 2ndary notes but not losing its youth. Probably needs another 5 years before it hits its maturity plateau. Good depth of flavor and smooth. 94pts.

1995 Dom Perignon Rose: Very different, nice pink hues. Nose throws off surprise surprise ... Pinot Noir aromas. Think the tannins a bit too dominating over the other elements. Not quite the complexity and depth to take this to the next level. I kept going back to the 1990 Enotheque. The '98 was by now almost flat at this point (~2hours). 91+pts.

Of the three the 1990 Enotheque was the winner. The '98 while less complex is drinking well now - hard to say if it will remain pleasurable later in life. Rose was not bad but maybe given my expectations and its price - got rated slightly lower than the rest ( the Rose costs more than even the Enotheque - figure that one out).